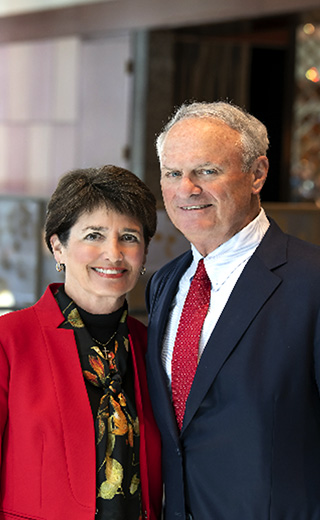 Guests will enjoy an evening of safe, socially-distanced fun with dinner, cocktails, and a silent and live auction, all to benefit the important work Community LINC does each and every day.

The Hometown Hero Award was established to illuminate the extraordinary impact an individual, couple, or organization has made on the greater Kansas City area by bettering the lives of the most vulnerable citizens in our community. This year we are honored to announce Peggy and Terry Dunn as the 2021 Hometown Heroes!

Peggy and Terry Dunn are the metro’s own power couple, known for their legacy of leadership and philanthropic investment in our Kansas City community!

The two have received more than 30 awards and served on over 70 boards for the betterment of our region.

In 2007, Peggy served as the first-ever chair for the newly formed United Way of Greater Kansas City. She has been recognized extensively for her many public service contributions. She has led the City of Leawood, one of the fastest-growing cities in the metro, as Mayor since 1997.

Terry is an award-winning entrepreneur and retired President and CEO of JE Dunn Construction. During his tenure there he grew the business from an $80 million regional contractor to a $2.8 billion national contractor. After his retirement, Terry formed DD Ranch Leawood, a home for Senior Executives who have retired from major companies and are staying actively engaged as investors, directors, and entrepreneurs in corporate, civic, and charitable initiatives.

Peggy and Terry are married with three sons and a daughter. We are grateful for the Dunns ongoing impact on our community and are excited to honor them as Community LINC’S 2021 Hometown Heroes!

While we intend to gather on October 2, 2021, at the Sheraton Exhibit Hall, your safety remains our priority. We will closely monitor both Kansas City, Missouri and CDC guidelines and proceed according to required protocol. Should your safety necessitate it, we will hold our event virtually. Whether together or online, we look forward to joining together to support families in critical need in our Kansas City community.

Every contribution makes a difference. Your financial support allows us to offer programs that truly transform lives in Kansas City.

Ending homelessness for this generation and the next.